Art has played an important part of James’ life; since an early age he has visited art galleries and found they had a calming effect on him. When diagnosed with autism at three and a half years old, pictures and images also became a vital form of communication in his school years.

In 2011, James moved from Eastbourne to North Yorkshire and was inspired by the rugged landscape of the dales and a woodland close to his home.

Additionally, James’ passion for tackling waste started in early childhood as he tidied up litter in his local community and began collecting reusable items that would otherwise have been discarded. These combined interests of art and nature have developed into the eye-catching and thought-provoking environmental art that has won James acclaim and helps to highlight essential environmental messages. 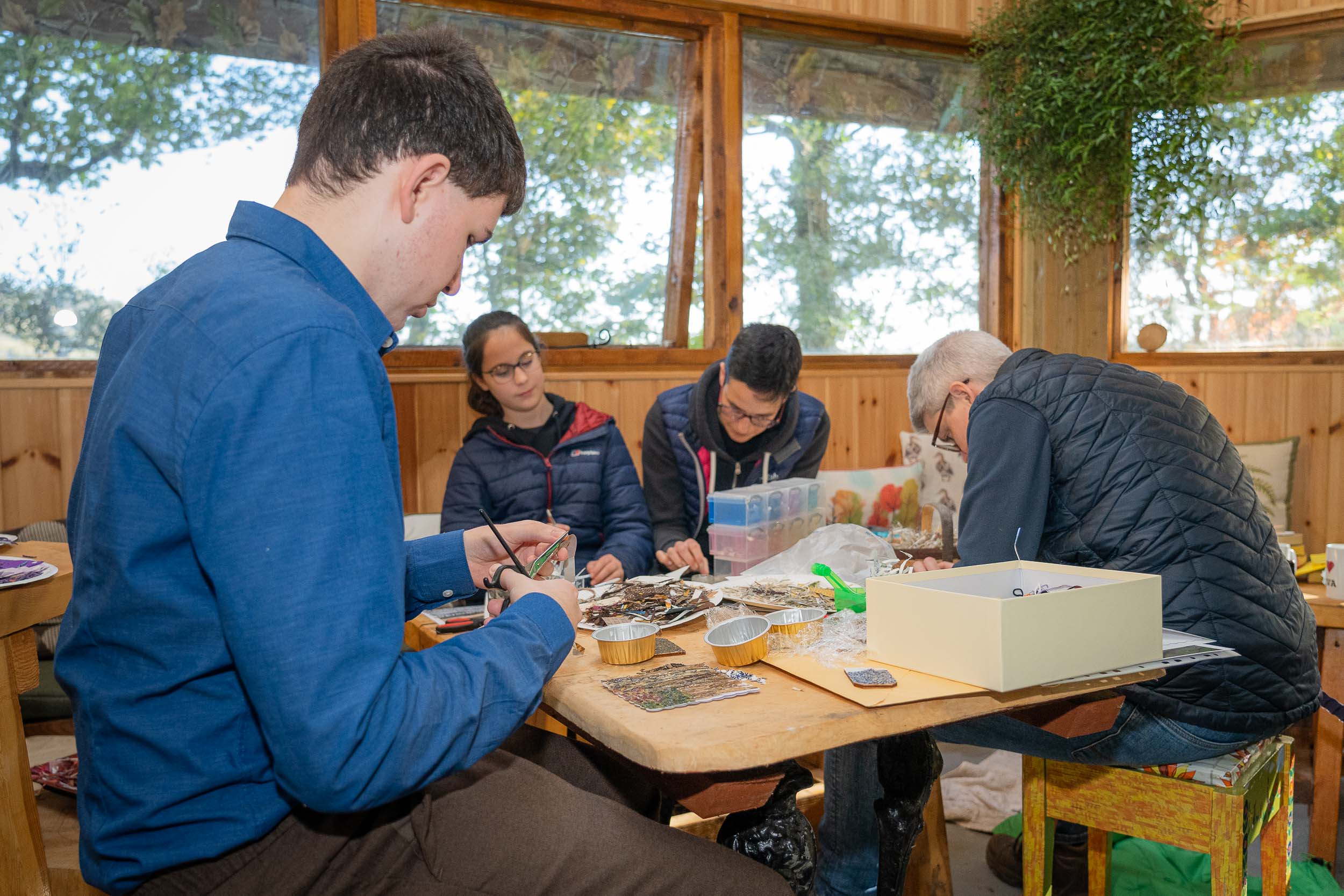 Journey as an Ambassador

Due to his love of trees and woodland settings, James contacted The Tree Council, seeing a connection between his environmental art and the values of The Tree Council. With the Young Tree Champion programme recently underway, James was an ideal ambassador with a passion for communicating an important message widely and in a creative and accessible way.

After being nominated by The Tree Council, James was named as one of 26 One Step Greener Ambassadors for Cop26. This involved James attending an event at Downing Street hosted by the Prime Minister, sharing his work as an artist and as a Young Tree Champion Ambassador.

Not only has James communicated his environmental messages through his art, James has designed the very first PECS® (picture exchange communication system) symbols to help children and young people with complex communication needs to understand the environmental crisis and begin to communicate their passion for action. This innovative development allows all young people to join in the climate and nature debates and become a ‘Force For Nature’.

Recently, James’ ‘Waste to Wall’ exhibition has been on display at Fountain’s Abbey, North Yorkshire and The Image Collective Gallery in Leith, Edinburgh. He is also starting a year’s ‘Artist in Residence’ at Whitewoods Wellbeing in Fishpond Woods, North Yorkshire, where he will lead workshops and display art work that shows the value of trees and nature and raise awareness of the nature crisis.

As a result of James’ relentless work to advocate the importance of nature, he has recently been filmed for BBC Gardener’s World sharing his views about the importance of trees and woodland and the varied work that he has done to promote this, including as a Young Tree Champion Ambassador.

James at a glance


James creates mosaic-style collages using waste and recycled materials to create artworks that highlights the beauty of trees and the natural world and the nature crisis that we face.

Being an ambassador has had a positive impact on James himself.

“Being a Force For Nature Ambassador for the Tree Council has given me the confidence to share my views and my form of environmental art on a national level.”

James has spread his message about the value of nature and his role as an ambassador through his exhibitions across the UK, working with young people, engaging members of the public and raising awareness.

“I hope that when young people and members of the public look at my art they will understand the message that we can all connect to nature.  I like to think that one of my latest collages named “At Twilight” could signify that although it is late in the day, we must all do more to rescue our planet before it is too late. I hope it’s not too late” 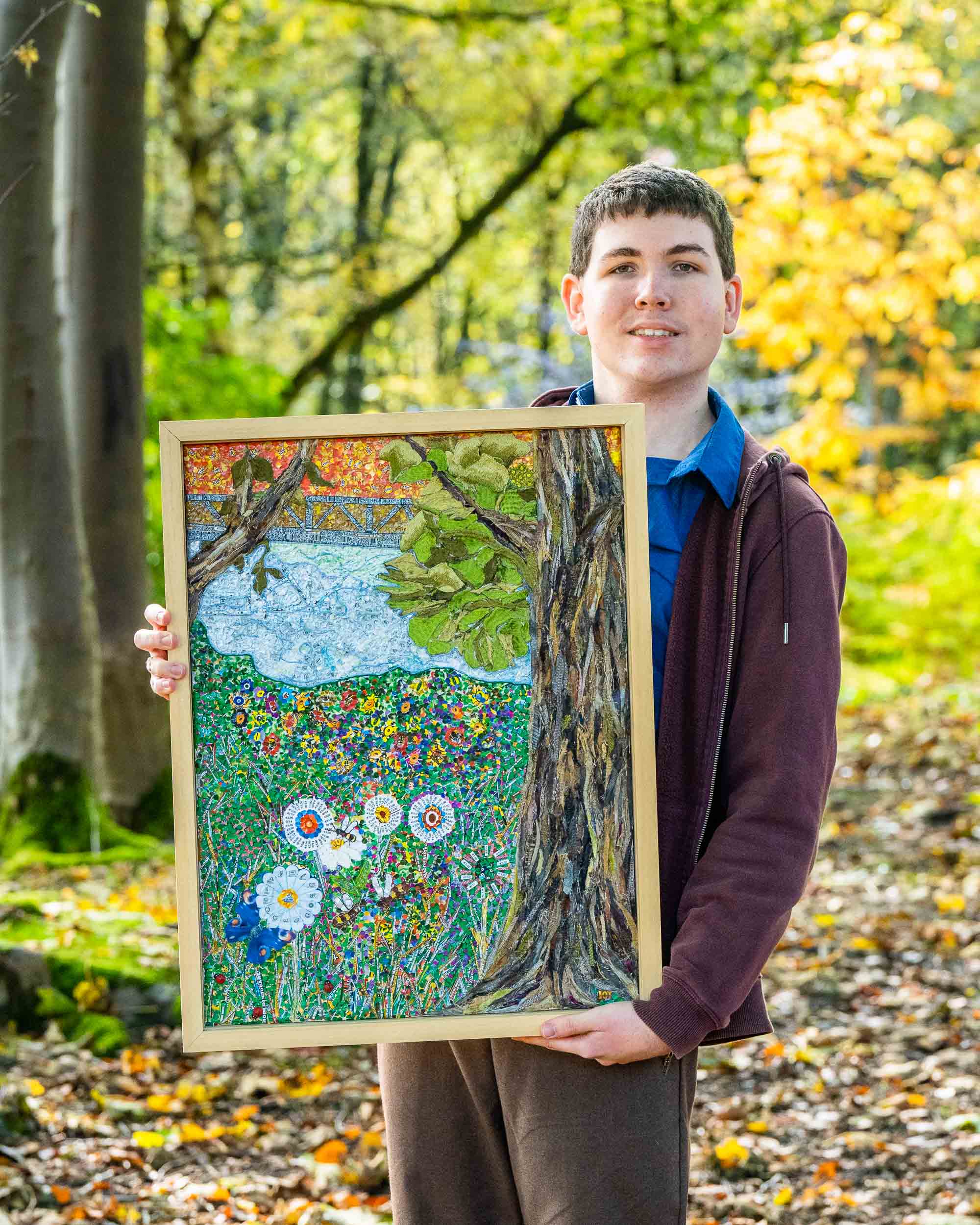 A visitor to James’ exhibition said, “What an amazing talent and an inspiring story. We look forward to seeing more of your wonderful art.”

Being selected as a Cop 26 Ambassador, James has raised his art and involvement in Young Tree Champions to a prominent national platform.

Cop26: “James Owen Thomas is a student, passionate artist and committee environmentalist based in North Yorkshire. Earlier this year he joined The Tree Councils Young Tree Champion ambassador programme, and has since inspired thousands of Young Tree Champions in schools across the UK through his artwork which uses recycled materials to create mosaic-style collages that depict the natural world from landscapes to birds to trees. James, who is on the autistic spectrum, is leading engagement with Special Needs Schools for The Tree Council.”

Louise Hotchkiss, Operational Director at Pyramid Educational Consultants UK Ltd agreed, adding: “We are thrilled to be able to support James in his work as a Tree Council Ambassador by producing a special edition set of environmental themed symbols. James used PECS® to support his communication when he was younger; it is fantastic that he is now using symbols to aid him in spreading the message about climate change and what everyone can do to prevent further damage to our planet.”

“When first at school, I relied on pictures for communication, using picture exchange systems (PECS) to follow timetables and social stories.  I can’t say I was a model pupil at school but at least I showed some examples of green behaviours with my special interests in recycling and nature.  I feel very pleased now to be involved in a process with the Tree Council and the manufacturers of PECS to provide some ideas for symbols that represent climate change and what steps we can make to improve the world we live in.  I have spoken to children before about the importance of recycling and reusing as many of our materials as possible and I will continue to do this in my Force For Nature Ambassador role.”